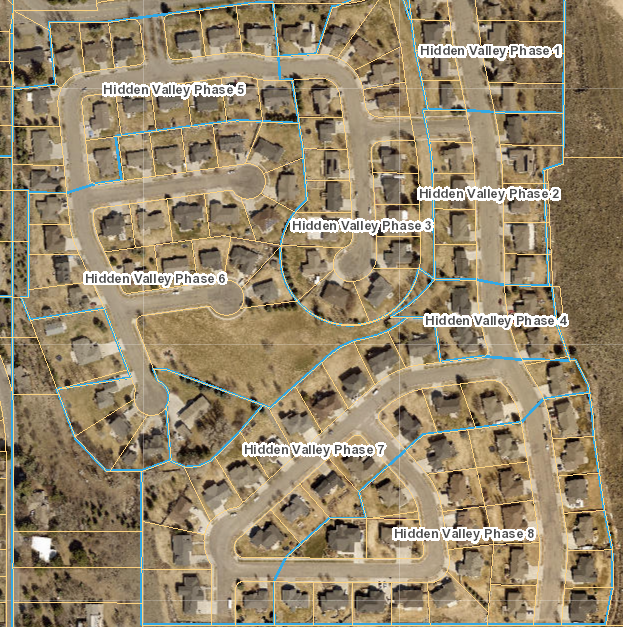 The Hidden Valley subdivision is a beautiful subdivision built at the base of a canyon in Rexburg. It is located off of N. Hill Rd. and it's close to Madison junior high school. It was developed in eight phases with the first phase recorded on November 8, 1998, and the final phase being recorded on May 10th, 2005. The developers were Gene and Clarann Palmer and Don and Marcile Blunck.

The Hidden Valley subdivision has always been a very popular subdivision. It features 3rd acre lots and many beautiful custom homes. There is also a large park located in the center of the subdivision, and beautiful open space between the homes on Jerry Ave and N Hidden Valley Road.

The Hidden Valley subdivision has certainly faced some hardship. Rexburg experienced an enormous thunderstorm on July 15, 2014. This thunderstorm was of epic proportions. Rexburg in modern history has not had a rainstorm like this. It was an extremely localized storm that stalled about Rexburg for about 40 minutes. During these 40 minutes, this storm dropped around 2 inches of rain. Because of the topography of this subdivision, an enormous amount of runoff came down through the subdivision. Unfortunately this resulted in an overload of the runoff ditches that were in place and ended up flooding many homes in the subdivision and around Rexburg. A few images of the aftermath can be seen here. A local marine biologist summarized this event in a blog post that can be found here.

The city Council initiated a task force to investigate the flood damage and how this could be prevented in the future. Luckily this event has not been repeated and with the upgrades to the runoff system in hidden Valley, this should not be repeated in the future should a similar storm happen again.

More recently in 2022, the hidden valley subdivision rallied together in opposition against the rezone of an adjacent property. The developer of the adjacent property was seeking a reason from low density residential 1 to low-density residential 2. The Hidden Valley subdivision came out in great opposition against the rezoning due to the wide variety of homes that could be developed under that zoning ordinance. The homeowners wanted a contiguous look and feel of the subdivision that was going to be developed next door. The request was originally denied by the city for the rezone, however on August 22, 2022 the Rexburg city council granted the developer their zoning appeal.

The Hidden Valley Plat Maps can be viewed below: